A story from Montana friends currently living in Tanzania, Africa

Each year the Stewart’s celebrate the Passover in someway.  Sometimes we prepare a Seder meal, other years we read the Passover story (in Exodus), and sometimes we focus on the Last Supper and talk about how Jesus taught the full meaning of the Passover.  Whatever we do, each year we remember what God has done in the past so we can meditate on what he is doing in the present to prepare for what he will do in the future.

This year Abigail asked, “Dad, why are we doing Passover?  We’re not Jewish.”

The Passover in Egypt was a taste of what would come.  It cemented in early history that God had chosen a people to whom he revealed himself.  God destroyed the mighty Egyptian empire and that mighty empire humbled for the world to see released the Israelite slaves. It forever reminded the world that God is a god of wrath and great mercy.  Sin carries serious consequence but grace is given freely. God has a people he calls his own and he desires to have relationship with people.

Just before the exodus occurred, the Israelites slaughtered a spotless lamb as the Passover lamb. They then took the blood of the lamb and put it over their doorways. The death angel of God (representing his wrath for the sin of Egypt) passed over any door that was covered with the blood of the lamb (representing God’s merciful, undeserved grace).

It was no mere coincidence that Jesus was crucified on the Passover holiday.  Nor was it mere allegory that he taught that his blood was the key to salvation.

“each year we remember what God has done in the past so we can meditate on what he is doing in the present to prepare for what he will do in the future.”

Passover is more than a thematic setting of the crucifixion.  Passover is the introduction to the resurrection.  Anytime Jesus or the Apostles spoke of him as the Lamb of God (see John 1:29), or spoke of his blood, or salvation from sin and death, they were intentionally making connections to the original Passover and exodus from Egyptian slavery.  Jesus preached to Jews, therefore each member of his audience understood the imagery and significance of the Passover.

Anytime he referenced blood or the lamb he was saying something like, “You know the greatest event in the history of our people Israel.  Get ready, the greater event, a Passover for the whole world is about to come. And you can be apart of it if you cover the doorway of your life with the blood of the true Lamb of God.”

To answer Abigail’s question I said, “Well, while we aren’t Jews in the national sense, we are members of the family of God in the spiritual sense.  Jesus and the Apostles taught that whomever believes in him as Messiah is like a wild branch “grafted into the tree” of God’s family.  Even Gentiles (non-Jews) are considered Abraham’s offspring once we follow Jesus as Messiah.” (see Romans 11:11-24, Romans 9:8).

The Stewarts are Gentiles who have joined the people of God.  We can celebrate the Passover because it is a remarkable event of our larger family history.  But more importantly, as Christians we can celebrate what the Passover foretold.  We see the hand of God not only in a far ancient historical event (the exodus), not just in a nearer past historical event (the crucifixion), but also in the full thread of time – past, present, and future.

Whether or not you celebrate the “Jewish” holidays you can celebrate the providence, love, and power of God throughout history and in your life.  He is active and he is actively saving people and calling them into his family.

Have a blessed Passover day as you prepare for Resurrection day.

Faith in his work gives us joy in all circumstances and inspires us to go where ever he asks us to go. 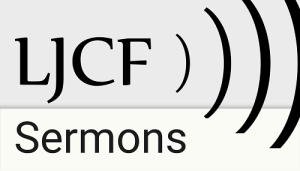